This report allows you to view and analyze the delivery errors (bounces) which occurred in your messaging. It is particularly useful when a large number of your emails fail to be delivered and you need to localize the source of the problem.

Bounces are divided into two types: hard and soft. Hard bounces arise due to nonexistent mailboxes, and they are automatically removed from the database after each send. Other bounces, which occur temporarily and can be corrected, are soft. They can be caused by the following situations:

Since soft bounces are usually temporary, you can select all subscribers who returned such errors in response to a specific message and try to send them this message again.

The report indicates the following data:

The remaining columns group undelivered messages according to the reason of failed delivery:

It is possible to to export all of the email addresses which have generated bounces of any or of a specific type in a CSV file. To do this, click the dropdown button next to the desired column heading and select Export: 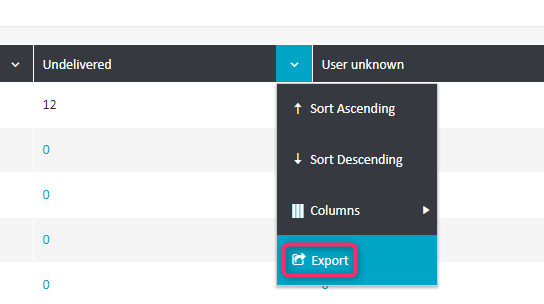 Note that the numbers of bounces within the table are clickable and allow you to access more specific information on the received server response:

In the subsequent detailed report, you may, for example, find delivery errors which contain a specific text in the server response. You may also group the results by Domain, Message, List, and IP Address.